Your Business Tip to
Work Smarter not Harder

What do you do if you have a staff member or an employee that just really doesn't fit your culture? These are the type who sort of make you feel like they're holding you hostage. But why can't you just let them go? Maybe because you feel like, "Hey, I really can't. They're just too good." Has this ever happened to you?

I'm going to be sharing with you some strategies to identify who these people are, what to do about them and help you to illuminate what is the cost of them staying in your business.

If you have ever felt hostage by a challenging employee (not necessarily a bad person) or someone who isn't just a really good fit for your company - they're really good at what they do but maybe they don't fit your culture or they're not a good team player. If you think about it, they're like our kids testing us and pushing our boundaries. They know they got us because of their skill level and we just let them get away with it. The challenge with these now comes to us. We don't let them go because they're really good at what they do, but they are a challenge because they don't get along with anyone else. They have this "ME" mentality and not a "WE" mentality.

I want to share with you what I learned from another ActionCOACH Dan Holstein on how to identify and deal with people like these. 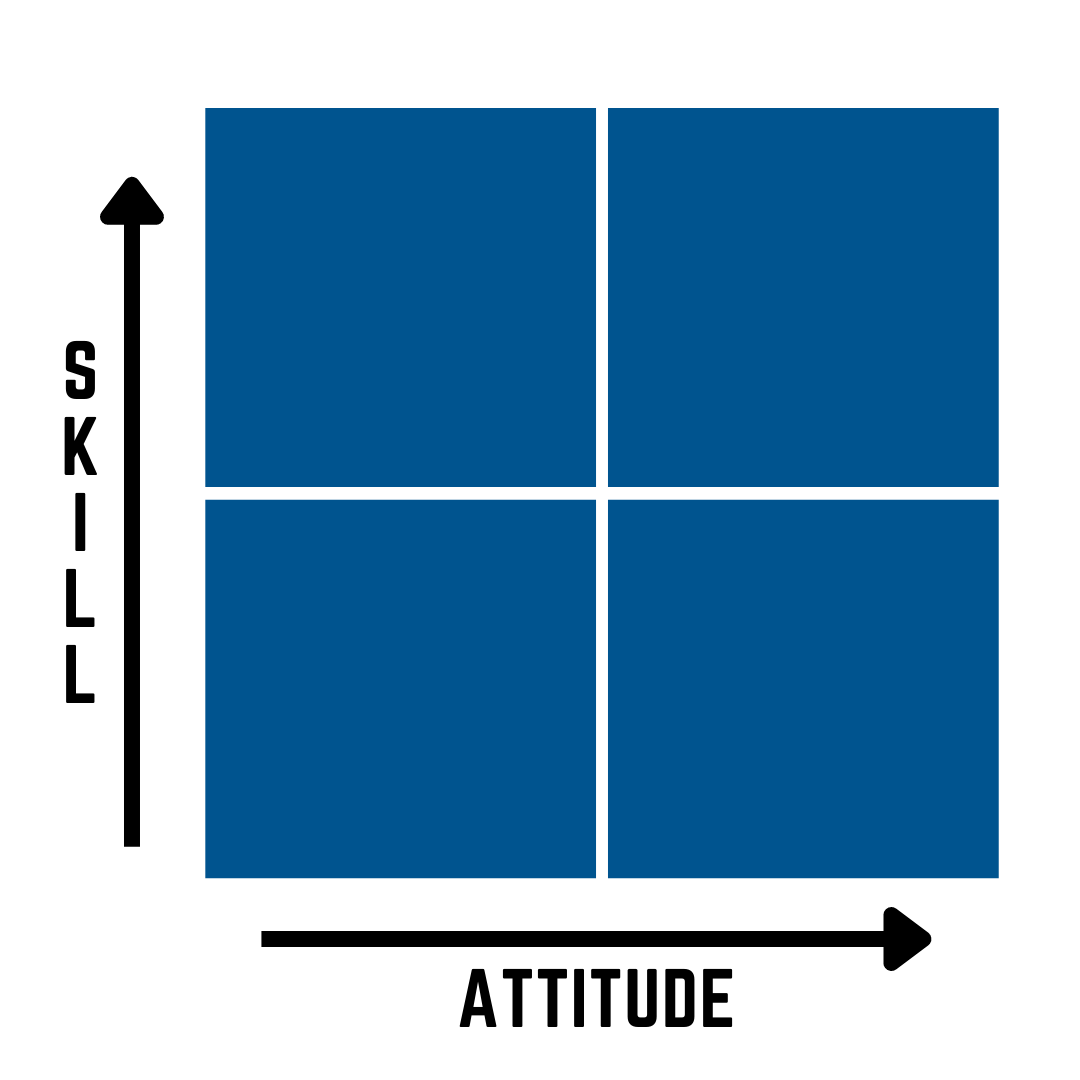 The question is where do we put our employees? How do we quantify or qualify an "A" player in our organization? We'd like to think that they have a great attitude and great skills so we're going to put them up in the top right hand corner of the grid. 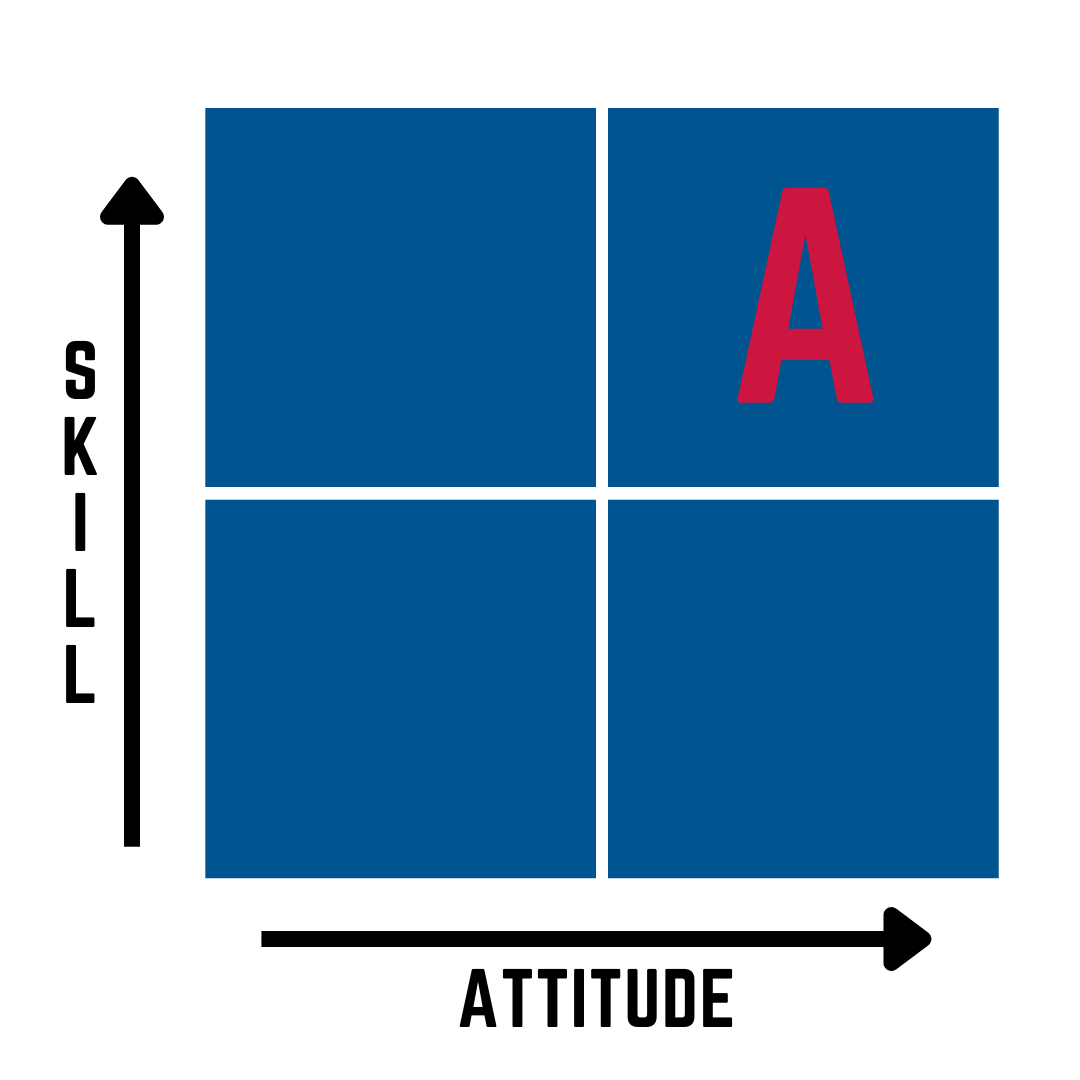 The question is what do we do with our "D" players? These are the ones were there were hiring mistakes and it's better if we let them go to pursue success somewhere else, right? But really, we shouldn't have even brought them on in the first place. It's pretty easy to see that they're going to be with low skills, and poor attitude. That's going to be down in the bottom left hand square. 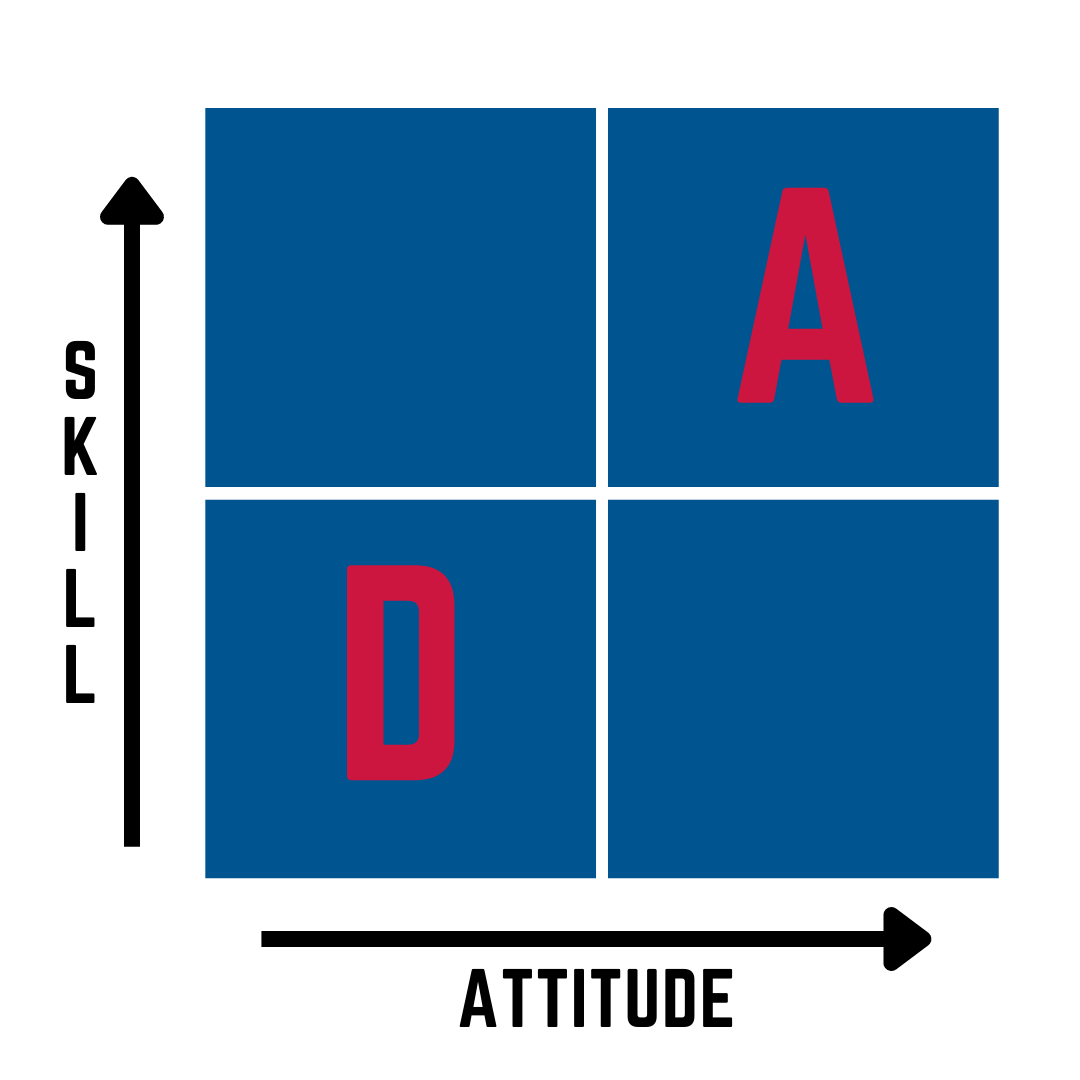 But now it gets tricky. Where do we put our "B" players? For some business owners, they say that "B" players must have good skills. So we're going to put them in the top left. I'm going to sort of counter that idea and put them down in to the bottom right. "B" players have some skills but they haven't developed all the skills they need to be an "A" player. 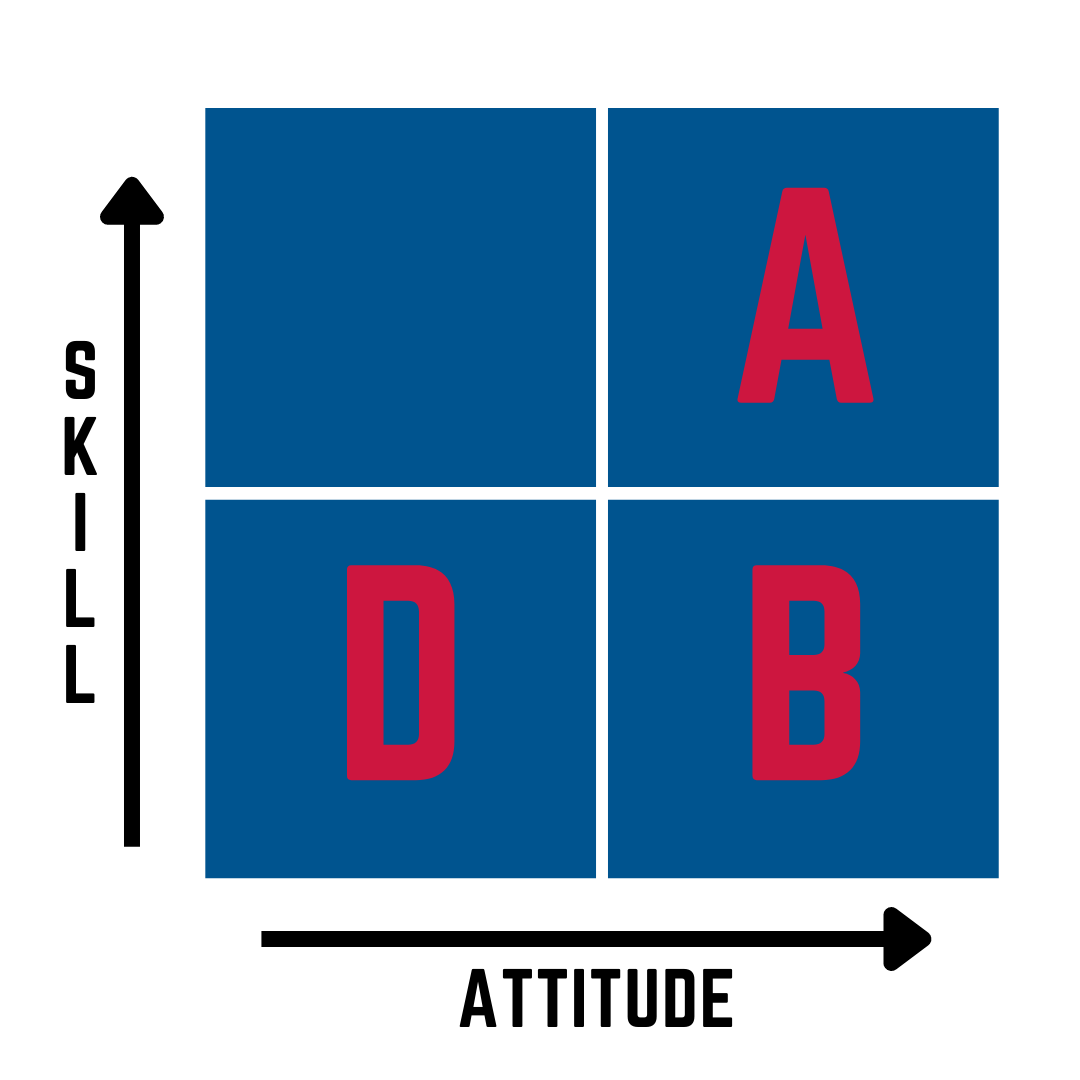 This now leaves our "C" players at the top left. This means that they have a great skill but maybe their attitude isn't really where it needs to be. 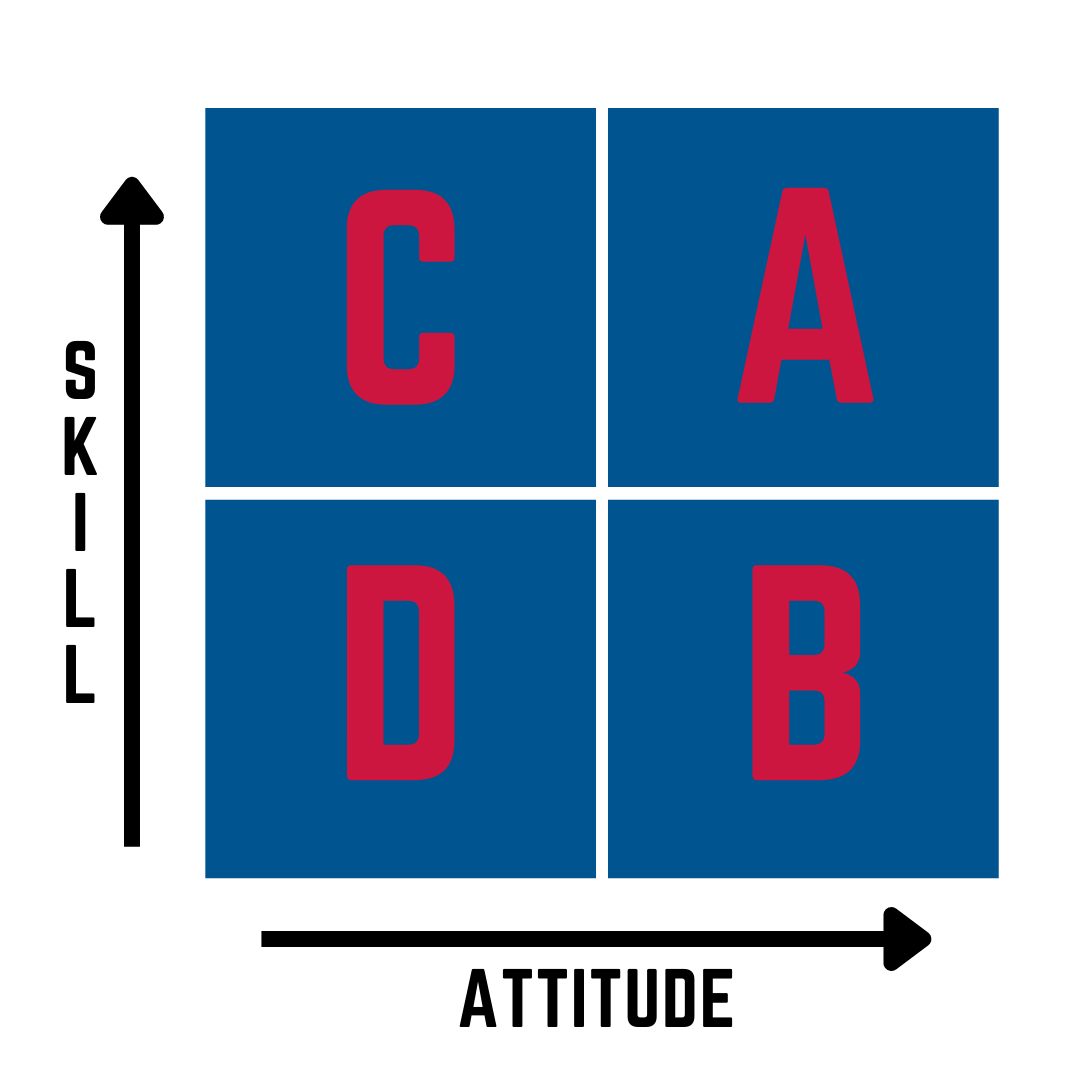 The question is, what happens if we keep "C" players in our organization? Most business owners actually do keep "C" players because they're really difficult to get rid of because of their good skill set. We're afraid to let them go because we can't tell who's going to fill their skillset when they're gone.

If we let that "C" player continue like that, you're going to have the possibility of having an "A" player being affected negatively. You need to sit down and take a look at what's going to happen next.

We can easily shift a person's attitude downward and it's a lot more difficult to shift an attitude to the positive or an attitude upward. This is why most "C" players never want to get better in terms of attitude. They don't think they have a problem. And because of this, they still become not a good fit for our organization. What we want to do is make sure that we don't keep our "C" players because they impact our "A" players, which is really bad.

If you have a "C" player that's coupled with a "B" player, we know that "B" players have a great attitude but they don't have all the skills that they need to really excel in their role again. If they start hanging around with a "C" player, they're going to start having an attitude change as well. Which means that "C" players is going to morph into a "D" player. Now, that's a real problem. We have fewer "B’s" and now we have more "D's" and we're going to have some turnover and productivity issues.

In summary, pair up a "B" and an "A" player so that the "B" player is going to get better. But if we pair up either, an "A" or "B" with the "C" or if they're just exposed to either of them in the organization, their attitude is going to shift to the negative and that's when we will have a big challenge.

I hope this tool has been helpful to you in terms of being able to determine who do we have on our team - A, B, C or D. You need to realize that when you let your "C" players go, because you finally realize that they're not a really good fit, those "A" players and "B" players are going to probably come up to you and thank you because they've been exposed to all this negativity and poor attitude and they're going to start wondering what took you so long to get rid of this person.

If it resonates with you and you want to learn more about how to apply this to your business so you will have a team of "A" and "B's", instead of "C" and "D" staff members, who are just really there to pick up a paycheck, schedule a free strategy session with me.

Check out our other Business Tips to Work Smarter not Harder

Learn strategies to create recruit and keep motivated employees aligned to the vision and mission of your business.

Learn strategies to increase your revenue, cash flow and profitability

Get news updates from ActionCOACH and learn about events, opportunities, Business Success Stories, and other inspiring articles.